Advertising legend, TBWA Global Director of Media Arts, and Chairman and founder of TBWA\Media Arts Lab honored with "Chairman Emeritus" title, and a love-filled celebration on Valentine's Day.
Clow announces retirement in a love note--to the ad industry, and to the company he spent his life working for.

LOS ANGELES, Feb. 14, 2019 /PRNewswire/ -- "Think Different (Here's to the Crazy Ones)." "Dogs Rule." "Yo quiero Taco Bell." "Keeps Going and Going." "Impossible Is Nothing." "That's G." Lee Clow, the visionary creative who touched the hearts of consumers and revitalized brands with iconic advertising campaigns, is retiring. 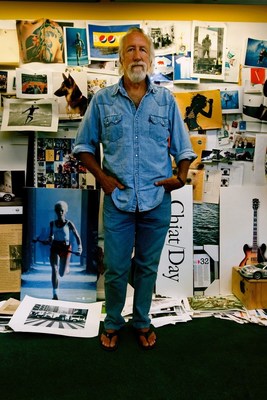 The Global Director of Media Arts at worldwide advertising collective TBWA, and founder and Chairman of TBWA\Media Arts Lab, will move into an advisory role as Chairman Emeritus of the agency he founded in 2006 to serve Apple and to embody his vision of an agency that impacts culture, rather than just "makes ads."

"The years I spent doing this thing called 'advertising' have been fun: challenging, rewarding, maddening—sometimes painful—but mostly, joyful. And I wouldn't trade a day of it." Clow—an original Chiat\Day partner and one-time TBWA\Worldwide Chairman—mused, in his "Love Note to Advertising," released today.

Clow continues to work on a personal film project that tells the story behind some of the most famous and culture-altering advertising in history, recalling his 50 years at Chiat\Day—the people, the work—and retelling how they did it.

He will also remain involved in the agency's social-impact group, For Good, based in Los Angeles, where he will advise on select projects for clients who share his commitment to the planet and the people (and animals) who inhabit it.

"Don't do the right thing," he challenged the agency, the advertising world, and clients, on TBWA\Chiat\Day's 50th anniversary in 2018. "Do the brave thing. Do the thing that doesn't just defy the status quo, but reshapes it, forever."

Clow actually announced his retirement to the agency, alumni and close friends in October 2018, at a party on Jay Chiat's birthday, part of the year-long "Chiat\Day 50" celebration. His decision to formally share the news with the industry on Valentine's Day is a nod to Jay Chiat's unconventional custom of sending Valentine's Day cards to staff, colleagues and clients, instead of the expected, "Season's Greetings," typically dispatched during December holidays.

Clow's career, that started at Chiat\Day in LA, spans five decades. It tells a story of "doing the brave thing," with disruptive campaigns that epitomized "California cool." He took Chiat\Day's creatively audacious style of advertising global when he helped lead the successful merger with TBWA, crystallizing the agency's reputation as the destination for creative professionals who want to do groundbreaking, iconic work.

"Lee will always be our creative conscience," said Troy Ruhanen, President and CEO, TBWA\Worldwide. "He has given so much to our company and to our industry.  His challenge to us, to do the brave thing, to Disrupt, will continue to be our North Star. We all love you, Lee."

"Lee is one of the most talented and visionary leaders in our industry," said Chairman and CEO of Omnicom Group, John Wren. "Over the past five decades, he has built a foundation of creative excellence for the TBWA network that has distinguished the agency among its peers. On behalf of the Omnicom family, I would like to thank Lee for his invaluable leadership and significant contributions to our group."

There's perhaps no better example of Clow's impact on the industry than his 30-plus-year partnership with Apple. From the launch of Macintosh in 1984, to the now-famous "Think Different (Here's to the Crazy Ones)" campaign that launched the rebirth of Apple in 1997. During the past two decades he helped orchestrate Apple's moves, into music with iPod and iTunes with the celebrated "Silhouettes" campaign, into phones with the category-redefining iPhone and then, creating the "campaign of the decade," "Get a Mac (Mac versus PC)." Then, he helped Apple forge a whole new category with iPad. Most recently, Clow led the creative teams that launched Apple Music into the world, and worked on the introduction of Apple Watch.

Tim Cook, CEO of Apple, added: "During his long partnership with Steve and Apple, Lee told powerful visual stories that elevated new technologies with the passion, creativity and ingenuity that define our own humanity. He helped Apple carry itself through times of challenge, and his work inspired audiences to look beyond the horizon as an exciting future came into view. Lee's body of work over five decades hums with cleverness, warmth and enthusiasm—and there is no doubt that it will inspire and motivate generations of 'Crazy Ones' still to come."

In 2018, Adweek named TBWA its "Global Agency of the Year," recognizing its strong global relationship with Apple—one of the industry's longest-running, and most prolific, creative partnerships.

The agency will continue to serve Apple around the world—led by Global President of TBWA\Media Arts Lab, Katrien De Bauw, and by Global Chief Creative Officer, Brent Anderson—and to set global creative standards. In 2018, Media Arts Lab won 64 awards: for the launch of HomePod, with its Cannes Lions Grand Prix-winning film, "Welcome Home"; for the evolution of its "Shot on iPhone" campaign into long-form content across the globe (notably, the film, "Three Minutes," in China), and into social media, with @apple; and for its "Behind the Mac" campaign (including an animated short for Apple's holiday campaign called, "Share Your Gifts").

"In constantly pushing ourselves to reach the creative standard he set, we are better than we ever could imagine being," said Brent Anderson, adding that, "So we'll do just as he always asked us to do: 'Make it smart. Make it beautiful. And have fun.'"

Clow often credits his artful, freethinking, creative style to his California roots. To celebrate his outstanding contributions to the creative community, and his love for his hometown, the agency has established a scholarship at the College of the Arts—School of Art at Clow's alma mater, California State University Long Beach (CSULB). Additionally, all proceeds from his film project will go into a college fund previously established in Clow's and Chiat's names at Art Center College of Design, which was created to assist low- and middle-income students with tuition fees and costs.

Also, TBWA agencies in Los Angeles will continue to honor Clow's impact on the Southern California creative community by partnering with Turnaround Arts: California, a national, public-private partnership that leverages the arts to spark transformation in the state's highest-need schools. Agency leaders and staff will work with Turnaround Arts educators on programs that will bolster the creative skills of teachers and students, including hosting workshops focused on graphic design, coding and creative problem-solving.

About TBWA\Worldwide
TBWA is The Disruption® Company: the cultural engine for 21st century business. Named Adweek's 2018 Global Agency of the Year, we create disruptive ideas that locate and involve brands in culture, giving them a larger share of the future. Our collective has 11,300 creative minds across 275 offices in 95 countries, and also includes brands such as AUDITOIRE, Digital Arts Network (DAN), eg+ worldwide, GMR, The Integer Group®, TBWA\Media Arts Lab, TBWA\WorldHealth and TRO. Global clients include adidas, Apple, Gatorade, Henkel, Hilton Hotels, McDonald's, Michelin, Nissan, and Singapore Airlines. Follow us on Twitter, LinkedIn and Instagram, and like us on Facebook.