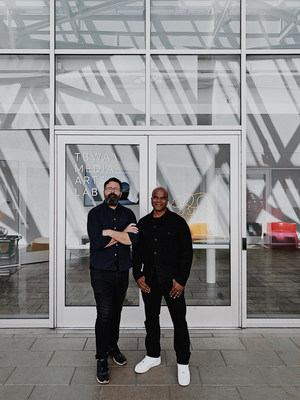 Edwards and Monn both started their careers at TBWA working under the legendary TBWA\Media Arts Lab Founder and Chairman Emeritus, Lee Clow. The appointment marks Edwards' third return to the TBWA collective, where he had been a group creative director at TBWA\Chiat\Day from 2003 to 2005, and an art director in 1990. Monn steps into his new role after more than 18 years within the TBWA family. Both will report directly to Global Chief Creative Officer Brent Anderson.

Commenting on the new appointments, Brent Anderson said: "Nothing is more important and thrilling than giving growth opportunities to those who have earned it through their leadership, vision and work. Chuck has done just that. He is a natural leader, a proven talent and one who will drive the kind of iconic work worthy of the world's most iconic brand. Geoff brings a unique blend of perspectives across both advertising and entertainment as well as a pedigree of amazing work, passion and impeccable taste. Also, he's just a great human being — exactly the mix that will further elevate the creative leadership at MAL and set the bar for what we create and how we create it."

"With these changes, along with our other amazing creative leaders — and with Apple as our partner — we will continue to exist in the space of big, culture-making ideas that drive the business and the brand forward," continued Anderson.

With a decorated career in the advertising industry and the entertainment community, Executive Creative Director Geoff Edwards will lead the agency's Apple Services workstream, which includes Apple TV+, Apple Music and Apple Pay. Edwards joins TBWA\Media Arts Lab from R/GA Los Angeles, where he led global campaigns that blended technology, design and entertainment for brands including Nike, Disney and PepsiCo. Prior to his role as executive creative director at R/GA, Edwards had spent three years at Creative Arts Agency marketing as its head of Creative, where he helped set a new standard for branded entertainment, leading the development of award-winning work for clients Jimmy Johns, Anheuser-Busch and Keurig. He co-founded three agencies (SPIKE DDB, DOJO and T.A.G.), and has held creative-leadership roles at TBWA, McCann Worldgroup, DDB and Publicis. Edwards' resume is complemented by his inspiring passion for humanity, which led him to co-found Saturday Morning, a nonprofit that leverages the power of creativity to help solve social injustice, and with which he remains heavily involved.

"When you get a call from Brent Anderson to work on the best brand in the world, in the house that Lee Clow and Steve Jobs built, the decision is easy," said Edwards. "I'm looking forward to working with an all-star management team and creative staff to help add to the legacy of iconic work for Apple."

Also appointed Executive Creative Director is longtime TBWA alumnus, Chuck Monn, who will oversee the agency's creative work for iPhone. Chuck began as an art director at TBWA\Chiat\Day in 1998, where he worked on accounts such as the International Olympic Committee, PlayStation, Visa and more. Monn joined the Apple-dedicated Media Arts Lab unit in 2007, the first year after Clow opened it. Monn has since been responsible for launching and shaping the global creative efforts for iPhone, Mac and iPad. His work is punctuated by some of the agency's most recognizable campaigns including, "Get a Mac (Mac versus PC)," named Adweek's Campaign of the Decade; the multiple-award-winning, "Shot on iPhone World Gallery," one of the longest-running campaigns for Apple; the launch of iPad; as well as a long list of work for Mac, including the recent award-winning, "Behind the Mac" campaign. Monn has been honored with more than 50 international awards, including a Cannes Lions Grand Prix, and One Show Gold.

With his elevation to executive creative director, Monn's impact on the Apple brand will continue to grow, helping further drive the global creative vision for Apple. "It's an honor to continue to help the passionate people who make up this great agency to tell the unique story of the most important brand in the world," said Monn. "I'm humbled to take on this new, elevated role within the agency, and the amazing opportunity to further Apple's mission."

Last year was a record-breaking year for TBWA\Media Arts Lab, with more than 60 top honors across leading industry-award shows, including a Global Effie, and three Grand Prix honors at Cannes Lions, Clios and Ciclope. Internationally the agency also had an incredible showing: TBWA\Media Arts Lab Shanghai was named Spikes Asia's "Country Agency of the Year," and it won a Greater China Grand Effie, and four Golds at the China One Show. The agency's incredible string of wins around the globe contributed to TBWA being named "2018 Global Agency of the Year" by Adweek, "2019 Agency A-List" by AdAge, and one of the "World's Most Innovative Companies" by Fast Company.

About TBWA Worldwide
TBWA is The Disruption® Company: the cultural engine for 21st century business. Named one of the World's Most Innovative Companies by Fast Company and Adweek's 2018 Global Agency of the Year, we create disruptive ideas that locate and involve brands in culture, giving them a larger share of the future. Our collective has 11,300 creative minds across 275 offices in 95 countries and also includes brands such as Auditoire, Digital Arts Network (DAN), eg+ worldwide, GMR, The Integer Group®, TBWA\Media Arts Lab, TBWA\WorldHealth and TRO. Global clients include adidas, Apple, Gatorade, Henkel, Hilton Hotels, McDonald's, Michelin, Nissan and Singapore Airlines. Follow us on Twitter, LinkedIn and Instagram, and like us on Facebook. TBWA is part of Omnicom Group (NYSE: OMC).